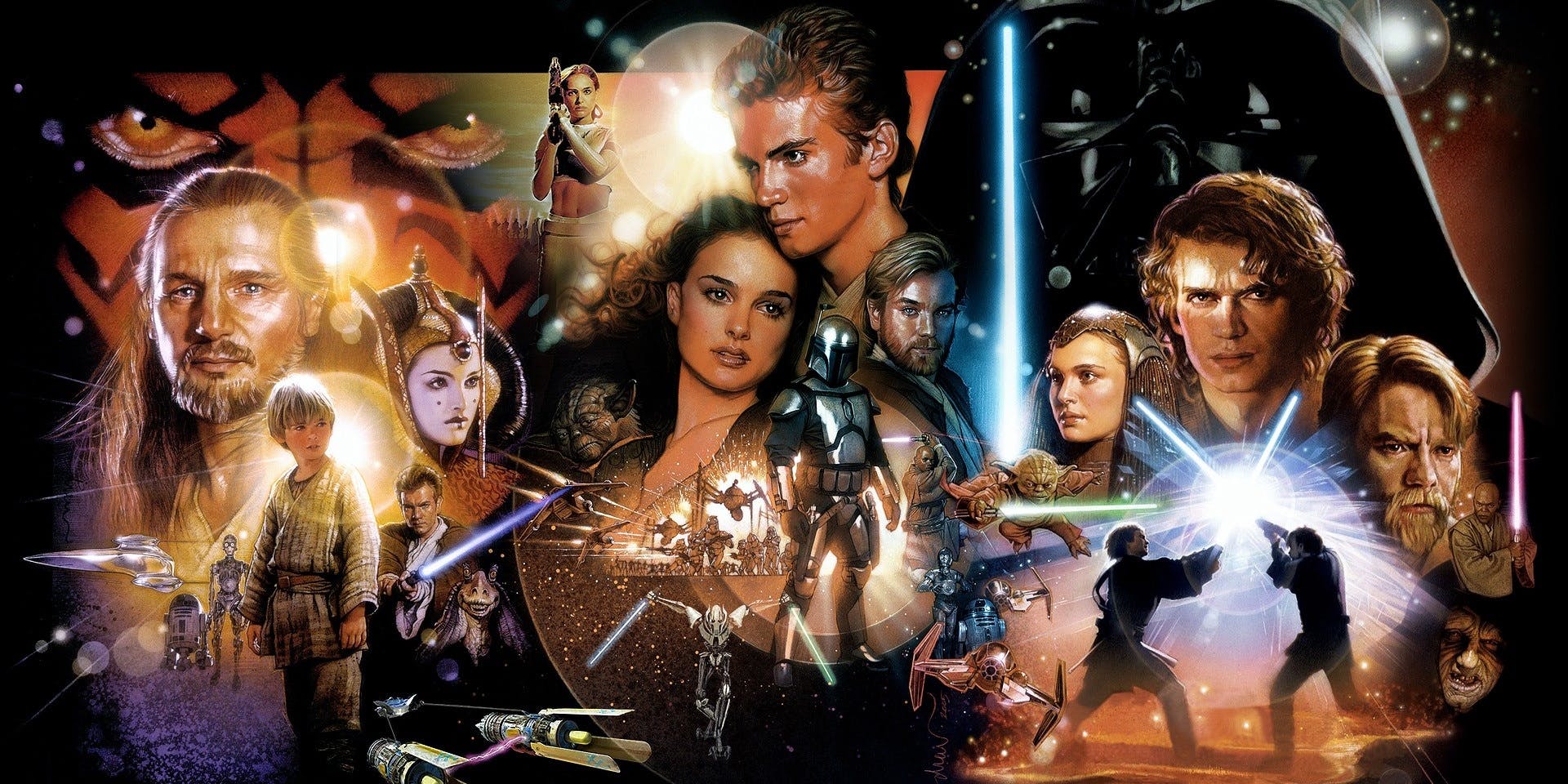 When the Star Wars Prequel Trilogy came out in the Early 2000’s (yes I know Episode I came out in 1999) hating on them was a great way to endear yourself to a community of Star Wars fans. Fans, at the time, were incredibly disappointed in the movies, particularly with some of the plot and lore decisions being made. But in recent years, there seems to be a new wave of love and popularity for these movies. We went from Hayden Christensen being one of the most maligned actors in Hollywood history, to fans everywhere clamoring for his return in the Obi-Wan Kenobi spin off show on Disney+.

A change in popular opinion this drastic begs the question, what changed? Obviously the movies haven’t, the awkward dialogue didn’t change, the hated characters like Jar Jar Binks didn’t go away, they’re the same exact movies they’ve always been. I would even go as far as to argue that what many would have considered to be the movies’ best attribute when they released, the special effects, are no longer as effective as technology has changed and better methods have emerged. The CGI backgrounds and effects don’t have the same timelessness as the practical effects of the Original Trilogy. So if the movies’ best feature hasn’t aged well, and none of the common issues with them has gone away, why are so many fans not only willing to accept them but also call them their favorites in the series?

Many fans will simply attribute the spike in popularity to the disappointment expressed by so many in the Sequel Trilogy being so profound that the Prequels look good by comparison. In my view, this is simply not the case, and I can prove it with one simple statement, even fans that love the Sequels have begun to love the Prequels. I believe that there were a handful of major factors that have happened since their release that has dramatically shifted the perception of the prequels in the eyes of fans, and that those things worked in tandem to accomplish exactly that.

To understand this better, we first have to understand the following. The Prequels are bad movies, they are an absolute mess. I’m not going to argue on this one, the dialogue is a disaster, the actors were poorly directed, it’s clear there was nobody there to tell George “no” like so many did in the originals, and many of the plot points messed with the established canon, so much so that the movies themselves lean heavily on the expanded universe to reconcile plot conflicts they couldn’t explain (example: “There you will learn from Yoda, the Jedi Master who instructed me,” creating a “well, actually” moment when Qui Gon is introduced).

Even now, when many people talk about the prequels, and the plot points they add a lot of conjecture. For example, when discussing Anakin’s seemingly instantaneous flip from light to dark, many fans will overemphasize the Shakespearian tragedy of it all, and create a deep and thoughtful narrative surrounding his subtle, long term, manipulation by Sidious, his disenfranchisement with the Jedi, and so forth, but that’s mostly a projection of their own views on to the palette of the Prequel Trilogy, not actually something reflected in the movies. The movies really do present what the haters project, Anakin as a whiny kid, passed over a promotion, and is scared about losing his wife so he commits mass genocide after killing a Jedi master on an impulse. You know it, I know it, yet I do the same thing myself. Yet, despite every single critical flaw I just mentioned, I love the Prequels, they’re some of my favorite movies of all time. But why? To answer that, we’re going to look at the three biggest contributing factors.

A NEW GENERATION OF FANS

This reason is probably the most simple, and will take the least amount of time to explain, yet is one of the biggest contributing factors to the resurgence in popularity. Simply put, the current generation of Star Wars super fans are no longer the fans who were children during the release of the Original Trilogy, most of them came of age either during the release of the PT or have never known a world without it. To this generation, the Prequels have an inherent nostalgia to them that allows fans from this generation to overlook all of their flaws because to them it’s not about the story, it’s about the feeling they get when they watch them and are reminded of their first time being whisked away to that galaxy far far away.

In the same way, many of the current Prequel fanss who look down on Sequel fans should be able to understand that their experience is no different, it’s not about flawless filmmaking, it’s about the fun memories and the overall experience and gravitas of the Star Wars franchise.

I’m not someone who gatekeeps with fandoms, but if you call yourself a Star Wars fan and haven’t played either of the original Battlefront games, you simply aren’t a real fan. Obviously I’m joking, but all kidding aside, the Star Wars video games of the 2000s, particularly the Battlefront and Republic Commando titles went a long way into helping fans love the prequels, particularly Battlefront 2.

Any BF2 players here? I’m going to ask you a simple question. Even if you were an OT purist, were you more excited to play as the empire, or the clone troopers? The rebels or the droid army? Let’s be real, the prequel content in the original Battlefront 2 was just way more fun. There were more Jedi, it was faster paced, the vehicles were more interesting, the ships were better, the exclusive map locations were better, everything about the prequel content was better than the Original Trilogy content.

I can not understate how much this game impacted my love for the prequels. As much as I love Darth Vader, it was kind of boring to plod around with him or the Emperor with their slow lightsaber attacks, especially when you could hop into the action as Darth Maul and jump 50 feet in the air, or sprint around and just annihilate people with that double saber. When I think back to my Star Wars experience of that time, I don’t think about the Originals, I think about playing Heroes vs. Villains on Mos Eisley and wrecking everyone with Maul or Anakin.

When the new first of the Battlefront games came out what was the single biggest complaint with the game? Simple, “where’s the prequel stuff?”

Video games aside, when you watch clips of the movies on Youtube, are you more likely to click on the Vader v. Obi Wan fight from ANH or are you, like me, clicking on the Duel of the Fates or Anakin v. Obi Wan. The style of the Prequels is just so much more conducive to modern media than the OT.

Even the bad moments are much more tolerable when they are connected to a meme you love. High ground anyone? Even the OT doesn’t get this much love for the cringey scenes. For example, which line do you remember more fondly? “Awww but I was gonna go to Tosche station and pick up some power converters” or “I hate sand”

Without question, the single biggest contributing factor to the sudden love of the Prequels is The Clone Wars animated series. This might be a blasphemous statement amongst Star Wars fans, but I might even go as far as to say that I enjoy The Clone Wars more than any of the movies, regardless of which trilogy. When I was a kid watching the Original Trilogy, my number one question wasn’t how Anakin became Vader, how the Republic fell, or how the Emperor rose to power. My number one question was “what were the Clone Wars.”

In fact, as a kid I remember my biggest complaint with the prequels being that we don’t even start the Clone Wars until the end of EPII and EPIII is just the very end of them. The Clone Wars tv show was the absolute perfect way to introduce fans to that era of Star Wars. In fact, when I think about Anakin Skywalker, especially when people talk about him as Luke’s father in the Original Trilogy, I’m not thinking about Hayden Christensen, I’m thinking of the animated character voiced by Matt Lanter.

Remember my earlier point about the narratives in the prequels not being as solid as fans make them out to be, and most of their favorite points being their own mind filling in the massive blanks? The biggest reason for that is The Clone Wars. Whether it’s Anakin and Padme’s relationship, Obi Wan an Anakin being “like brothers,” or Sidious pulling the strings behind the scenes, what the Prequel trilogy tells you, The Clone Wars shows you.

The Prequel Trilogy is a hot mess, but it’s our hot mess, and we love it that way. Could it get there on its own? No. But isn’t that the message of Star Wars in a nutshell anyway? Alone we’re weak, but with our friends and The Force (or in this case, hundreds of millions of dollars worth of multimedia projects) as our ally we’re unstoppable. They aren’t good movies, but I welcome them into the fold with open arms, because they are an important part of the story of the galaxy far far away that I love so much.

May the Force be with you.